Kilcash and the Butlers of Ormond: Conflict and Kinship from the Middle Ages to the Great Famine 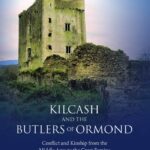 This book has three dimensions. First, it is the story of Kilcash Castle and its associated buildings. Secondly, it connects the settlement at Kilcash to the Butlers of Ormond, and thirdly it outlines the scale and form of the Butler estate between Slievenamon and Suir and its inhabitants over the centuries. Dr. Flood, through judicious use of local knowledge and archival sources, recreates the majestic splendour of castle, church, eighteenth century mansion, walled gardens and tree-lined avenues.

The book peoples the imaginatively reconstructed buildings with a succession of Butler proprietors, who held the manor of Kilcash from the sixteenth until the twentieth century. It traces the familial alliances of the Kilcash Butlers with influential families throughout the country, including the Bourkes (Galway), Brownes (Kenmare), Esmondes (Clonegal), Everards (Fethard), Hamiltons (Roscrea), Kavanaghs (Borris), Mathews (Thurles) and Purcells (Loughmore).

One of the best-known figures in the long history of Kilcash was Honora Butler, a daughter of the earl of Clanricard and the widow of Viscount Iveagh. As Lady Iveagh, she achieved fame in the lament ‘Cill Chaise’, familiar to generations of Irish school-goers by its evocative first line, ‘Cad a dhéanfaimid feasta gan adhmad’. The Irish text of ‘Cill Chaise’ by Prof. Daithí O hÓgáin† and the English translation by Eiléan Ní Chuilleanáin (formerly Ireland Professor of Poetry) are reprinted.

It is possible from the wealth of surviving material to recreate many aspects of everyday rural life in the first half of the nineteenth century, including changes in population in Ballypatrick, Kilcash and Killurney. Developments in agriculture and education took place alongside lurid crimes and political drama associated with the Repeal Association and Young Ireland’s Rising in nearby Ballingarry. International ties were created by emigration and military service. The book draws to a melancholy end with an account of the Great Famine.

Format: Hardback, 430 pages, 55 illustrations, many in colour
PRICE INCLUDES SHIPPING IN IRELAND
The Author
Dr John Flood is a native of Kilcash. He lectures in English literature at the University of Groningen in The Netherlands. He is the author of The Works of Walter Quin: An Irishman at the Stuart Courts (Four Courts, 2014) and Representations of Eve in Antiquity and the English Middle Ages (Routledge, 2010).