This is a lovely reprint of an old classic. This book tells the history of Clonmel dating from the medievel foundation of the town through to the start of the 20th century. It was originally published in 1907 and is generally recognised as the definitive work on the history of the town. This edition was reprinted in 2010, and is a high quality and robust book. All printing and binding was completed in Ireland by Irish companies. 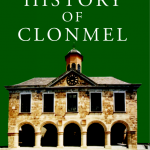 The much sought-after printed history of Clonmel will be available this Christmas.

The decision to relaunch the collector’s item, “The History of Clonmel”, was taken by a local businesswoman, after many requests from local historians keen to source copies of the work.

“The History of Clonmel has been a popular choice of many customers since I first opened my shop 15 years ago,” said Rosemary Donovan, owner of The BookMarket in Market Place. “Demand was so high I decided to have it republished.”

The book, written by Canon William Burke, was originally published in 1907. It is recognised as being the definitive work on the town of Clonmel.

Owing to the scarcity of the first edition, The History of Clonmel was reprinted in 1983. However even that has been difficult to find, with the price of both editions proving out of reach for most people.

“The History of Clonmel is a wonderful book covering the story of Clonmel from its medieval foundation to the dawn of the 20th Century,” added Rosemary. “Now it will be available again, this time at an affordable price for all interested in local history.”

Siobhan Ambrose, Mayor of Clonmel will launch the newly reprinted book in the Main Guard on Wednesday, November 24th @ 8pm.

Margaret Rossiter, Clonmel-based historian and columnist with The Nationalist, has written a new foreword to this latest edition, which will be available to buy on the night.

This book is now available to purchase from us online. We will post anywhere in the world. The price is €60 and includes the postage cost. We will do our best to get any orders posted by the next business day.